2016 was the first year that Full Stack Embedded was active in West Africa. We did electronics workshops and established connections for long-term work in Lomé, Togo and Accra, Ghana. It was exciting to work with so many smart and motivated young people, and we’re looking forward to extending our work in 2017!

This year’s courses were a bit of an experiment for us. We planned all of our activities from Germany and had only limited possibilities of organizing things in Togo and Ghana until we arrived shortly before the workshops took place. We saw this as an opportunity to

We never could have guessed how enthusiastic the students are, and how capable they are of learning rapidly and transferring that knowledge to real applications. It was especially impressive to see how easily and naturally they collaborated with each other – it made for a fun atmosphere. I was inspired to see the students teach each other.

The workshops also allowed us to gather a lot of feedback and we’ve learned a lot. We’ll apply these lessons in the course of the following year before coming back at the end of 2017. Keep your eye out for new lessons throughout the year! In the meantime, here are some of our impressions from the workshops. Check out our media page for some more visual impressions. 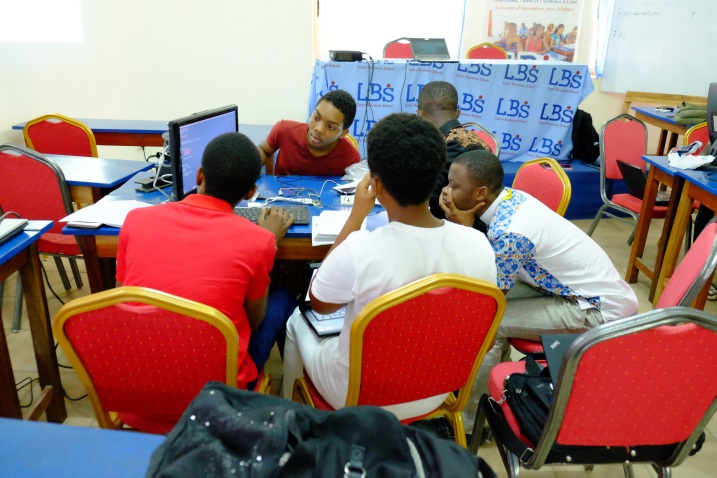 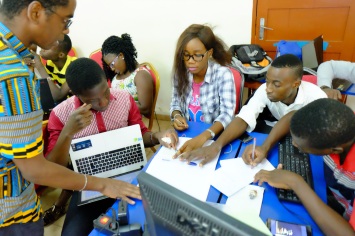 All hands on deck! 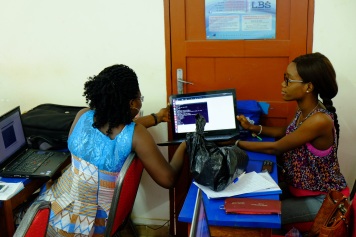 The students worked as a team

Daniel gives an introduction to Python 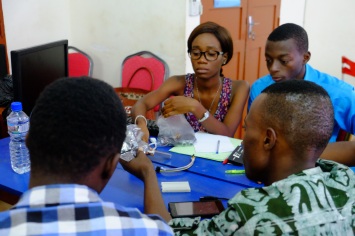 Setting up for programming exercises 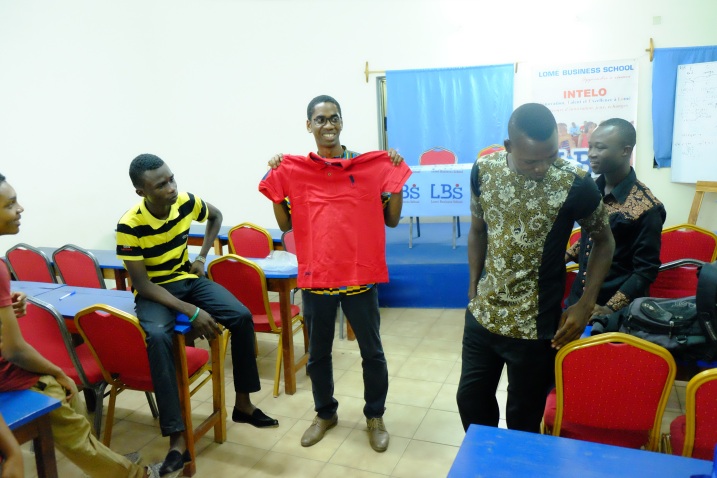 A goodbye present from LBS 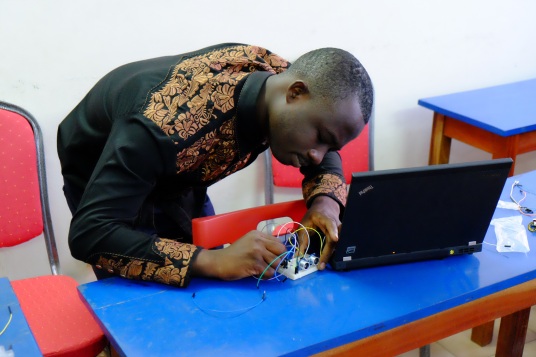 Getting to know the joys of a breadboard 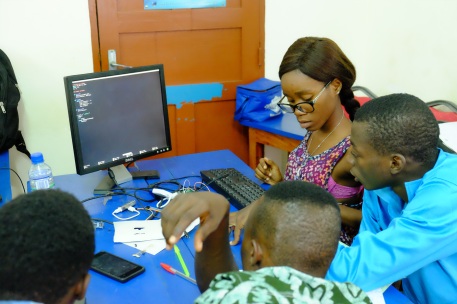 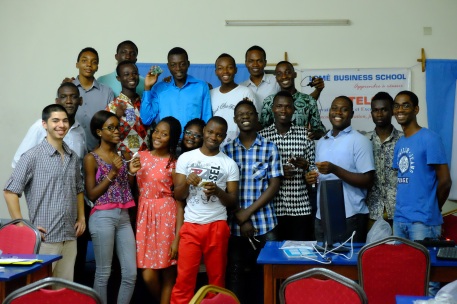 The successful end of day 1

Lomé Business School gave us a great welcome on November 30, 2016 – we didn’t have to worry about infrastructure at all, as the room was already prepared with WiFi, projector and even air conditioning. Most of the participants were from the first semester bachelor program, so we started off with an introduction to what for many of them was their first programming language: Python. We spent the morning learning the ropes with Python. It was very impressive to see how these first semester students rose to the challenge of participating in a workshop in English and not in their main language, French.

After a productive morning we took a short break for lunch and returned to tackle the hardware project: Putting together some prerequisites for a Park Distance Control. This required connecting an ultrasonic sensor and an LED to a Raspberry Pi and writing the code to get them to interact with each other.

It was almost magical watching the students work together. If one student was struggling, the others in the group helped them immediately. This was impressive, but what was even more amazing was that different groups helped each other. In courses I teach elsewhere, I often struggle to get students to cooperate this much – at LBS they did it naturally.

This paid off, too – after completing the exercises we gave them, namely connecting the ultrasonic and the LED to the Pi independently and interacting with them, some students had some extra time and attached a push button, using it to control the LED. We didn’t have to show them how to do this. That’s pretty good for less than a day of practice!

At the end of the day the students were happy, but the time had simply been too short, but in order to polish the whole thing off we returned the next week and worked with them another day and collected feedback for next year. All in all, it was a perfect first workshop.

Start of the impromptu workshop!

The students had a lot of work setting up 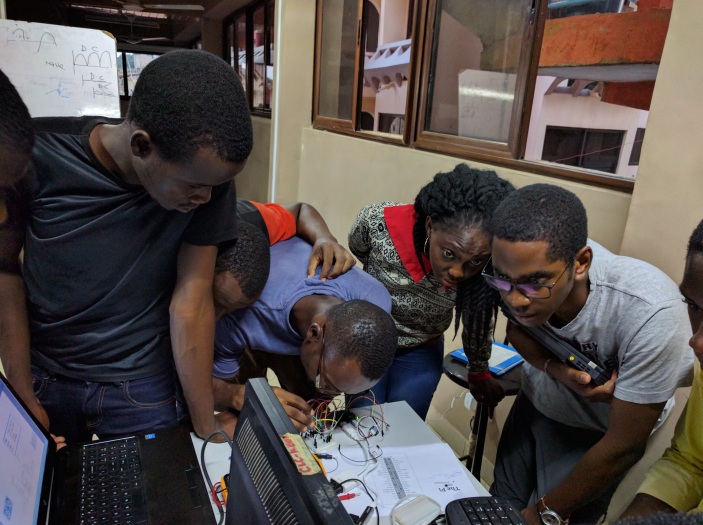 If it were easy, they wouldn’t call it “hardware”

A happy parting shot with the AIT students

Freddy explains some of the fine points about the hardware 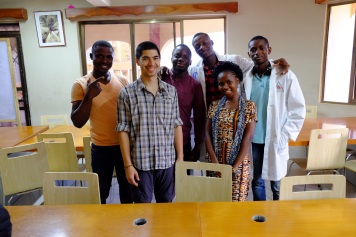 The trip to Accra Institute of Technology was an adventure in itself. After getting used to the slower transport in Togo it was a rush to go tearing down the bustling streets of Accra. We arrived shortly after 12, having crossed the border to Ghana in the early morning and traveling straight to Accra.

We arrived thinking that we would be meeting with faculty to discuss the approaching workshop, which would take place the next day, but due to scheduling conflicts we found that that plan would have to change. We had either the option of postponing the workshop until 2017 or of winging it with only a half a day.

It was a good thing that we’d come prepared, because having the workshop on that day with less than half the time we’d planned for it would have been a disaster otherwise. As it was, the faculty and students were extremely accommodating, moving around class schedules and providing us with a room and equipment so that we could work. We split the workshop into two groups, software and hardware, and got to work.

Despite these difficulties and the scheduling hiccups, doing the workshop at AIT was a dream come true. The students were very knowledgeable and thus well prepared to jump into things. They got to work immediately with the new concepts and tackled the project of attaching input and output sensors to the Raspberry Pi effectively, despite the small time budget. At the end of the day it was a success and we were all pumped to continue the great collaboration into 2017!

What to expect in the year to come

The workshops ran extremely well. We’ve discovered that the students at LBS and AIT are capable and willing to build some great projects. The contacts we’ve built up in both Ghana and Togo are very excited, as we are, to continue our efforts next year.

Upon our return to Germany, Frederic and I have been planning FSE 2017. You can follow us here on our site, on Facebook and on GitHub. We look forward to staying in contact with the students who attended the workshops, as well as to putting them in contact with each other.

We plan on returning to West Africa in December 2017. In the meantime expect at least once a month a post here with a tutorial and a homework assignment. If you don’t have a New Year’s resolution yet, try committing to being ready for FSE 2017! We will be.

My name’s Daniel Lee. I’m an enthusiast for open source and sharing. I grew up in the United States and did my doctorate in Germany. I've founded a company for planning solar power. I've worked on analog space suit interfaces, drones and a bunch of other things in my free time. I'm also involved in standards work for meteorological data. I worked for a while German Weather Service on improving forecasts for weather and renewable power production. I later led the team for data ingest there before I started my current job, engineering software and data formats at EUMETSAT. View all posts by erget

Find other ways to get involved here.