This year was the first opportunity for a member of the FSE European Team to visit Congo. Our Congolese representative Luvick Otoka had already established contact to several schools in Congo and led his own workshops there. This year, workshops took place with support from the Congolese Ministry of Education at
Ecole Nationale Superieure Polytechnique in Brazzaville and Institut Universitaire de Technologie d’Afrique Centrale in Pointe-Noire.

Each workshop was attended by an incredible number of students – over 70 apiece – and together they assembled and activated a Park Distance Control (PDC) device using a Raspberry Pi Zero W, the Full Stack Embedded Developer Board and several sensors. It was impressive to hear the symphony of beeping PDCs at the end of the day, and the students were excited to gain some basic familiarity with wiring, the operating principal of the sensors involved, and accessing their Raspberry Pis using ad-hoc networks and SSH.

The workshops were exciting – full of new students wanting to learn. They also were adventurous – there was a minor issue with a fire in the classroom in Brazzaville, prompting an evacuation and requiring some flexibility in planning. It was amazing to see how everything came together and to receive such a warm reception from the schools, the students and incredible support from Luzabu Group, who helped with logistics and translation where needed. Brazzaville, Pointe-Noire, we’re looking forward to seeing you again soon! Keep innovating!

Full Stack Embedded conducted two workshops this year in Accra – an introductory one on the new Basura smart trash can, led by Florian Rathgeber and Daniel Lee, and a workshop on the Alfred autonomous car, led by Nilson Nguimbi Mabika and Sidibe Mohamed.

Over four days, the students learned to set up a web service, exposing a web server that interacts with an ultrasonic proximity sensor installed on another device. The server and sensor were connected using an HTTP connection. This means that the students learned how to build an Internet of Things device and get it to communicate with a remote server using an Internet-style connection. Of course, Python was the language of choice for every component of this system. Newer students also learned from the older students how to use the Alfred autonomous car, also using Python for communicating with all sensors and steering the robot itself.

In addition to these activities, FSE established contact to several excellent local organisations, such as the Ghana chapters of Codebar and PyLadies. We also took the opportunity to strengthen our cooperation with Accra Institute of Technology, where the workshops took place. Congratulations everyone who participated – we’re looking forward to working with a new generation of excellent, motivated students in Accra and hope you’re as excited as we are!

Do you have a passion for spreading knowledge? Do you love connecting people? Are you interested in seeing robotic technology spread in West Africa? Let’s get together.

END_OF_DOCUMENT_TOKEN_TO_BE_REPLACED

In the wake of the FSE workshop which took place in Accra in December 2017, the AIT Robotics Club has been busy refining internal knowledge and working with other nearby colleges. At a dual seminar which took place on 26 April 2018, they taught workshops on the AIT Sea View and Cantonment campuses. Multiple lecturers were involved, with about 80 students participating.

END_OF_DOCUMENT_TOKEN_TO_BE_REPLACED

This year the FSE project is designed by students in West Africa. We received several good proposals, but only one could be the winner. FSE is happy to present the winning proposal for FSE 2018!

END_OF_DOCUMENT_TOKEN_TO_BE_REPLACED

Full Stack Embedded last visited the Accra Institute of Technology in December 2017, where we built Alfred, the flagship portion of the Full Stack Embedded educational platform. We’re returning again soon, but in the meantime, the students at AIT are reviewing our activities, transferring knowledge and polishing their skills.

END_OF_DOCUMENT_TOKEN_TO_BE_REPLACED

We’re growing fast – last year we developed a new robotic hardware platform and traveled to two countries, where we conducted two new workshops and strengthened relationships with students and teachers. While we were there, we planned to set up operations in two new countries. There we will support some of our former students as they become Full Stack Embedded teachers with students of their own. How exciting!

All these activities cost time, which we give gladly, and money. Up till now we’ve financed everything ourselves – hardware costs, travel, communication, everything. And as our activities expand, costs will rise. We’d love for Full Stack Embedded to keep pace with our students’ dreams, and we’re confident that we can do so – with your support.

In order to recover the costs for our 2017 activities, we’ve started a crowdfunding campaign. This is a short term activity and we will be expanding possibilities for more regular donations in the future. In the meantime, though, if you like what we’re doing and want to be a part of it, please check out the campaign and contribute if you can.

If you’re interested in contributing your time to the project – whether you program, do design, hardware development or are good at communicating with people – we need you. It’s a great opportunity to learn and contribute to something meaningful. Get in touch with us and we’ll get you started.

In the meantime, keep dreaming and keep innovating! We can’t wait to see what 2018 brings.

2017 is coming to a close, and it has been a busy year. We developed a new, low-cost hardware platform, returned to Ghana and Togo for advanced workshops with our students, and laid the groundwork for new collaborations in the future. Here are the highlights of what Full Stack Embedded has been up to.

After our beginner project, the Park Distance Control device, was a hit last year, we upped the ante by developing a new, low-cost platform for students to work with. The project can be found on GitHub – for lack of a better named we’ve called it the RpiAutonomousCar. In this post, we’ll call it Alfred.

Weighing in at a phenomenally low-cost of under 50 Euros, Alfred packs a serious punch. It’s powered by a Raspberry Pi Zero W and uses a custom-made board to connect to an LED, three infrared sensors, an ultrasonic rangefinder and two servos, which are mounted to a chassis with two active and one passive wheel for balancing. This leaves the Pi’s USB port and all antennas free to connect with additional devices. The board also exposes the GPIO pins for any extensions students want to build on top.

The full stack for Alfred therefore consists of the hardware itself, custom written drivers for each accessory, and three example applications. Two of these allow Alfred to navigate autonomously; one of them extends the stack further by containing a TCP/IP component, so that the robot can be controlled by another device in the same network.

Like in 2016, this year we visited Lome Business School and the Accra Institute of Technology. It was great to see most of the students we’d worked with the previous year, as well as several new faces. Over two days in each country, the students learned to assemble Alfred, write their own drivers and put those together into example applications. Afterwards, there was a brainstorming session where the students swapped ideas over what they’d like to build next year. We’ll be accepting their proposals in springtime. 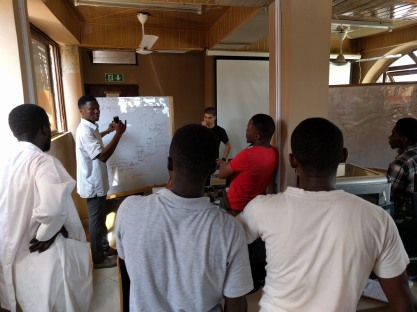 In order to program it, you have to be able to explain it. 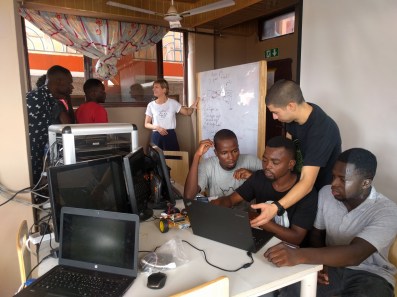 Drinking from some well-deserved coconuts. 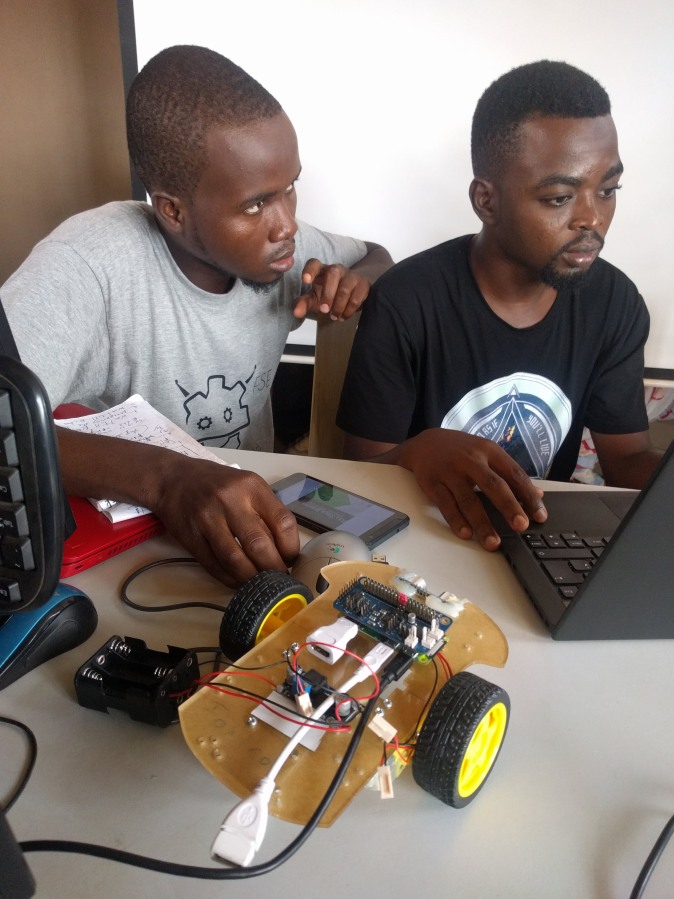 Contemplating the mysteries of robotics… 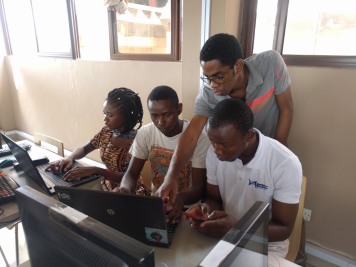 This group logged onto the Pi from 3 computers at once. 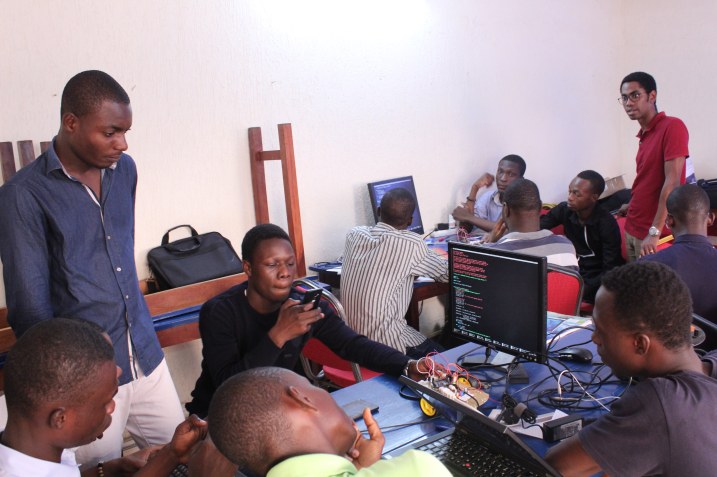 The robot’s moving for the first time!

Is everything hooked up right?

The students split up into their different groups here. 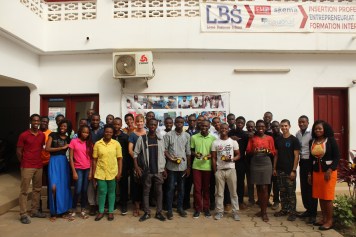 Look at those smiles! That’s what happens when you build robots. 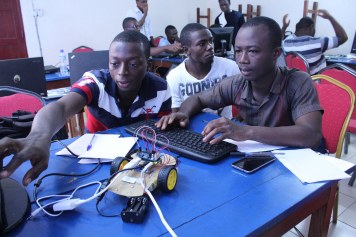 Concentration was at its peak. 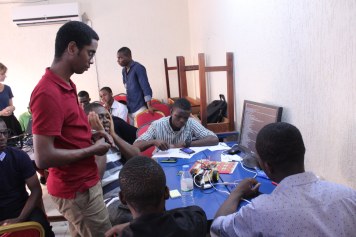 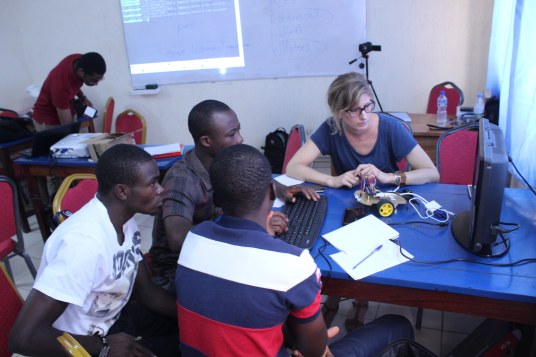 Pondering the magic of context managers.

Teaching throughout the year

The workshops were a big challenge for us, and for our students as well! In order to get prepared, we published one tutorial a month covering topics ranging from software development to the assembly of example projects. We were grateful that some of the students in Africa contributed tutorials, as well as a few esteemed colleagues in Europe.

Of course the tutorials were helpful for students wanting to get ready for the workshops, but we didn’t leave it at that. Magic happens when students are able to help and learn from each other, as well as have access to teachers. In most parts of Africa, Internet access is extremely limited, and WhatsApp has proven by far the best tool for everyone involved to keep in touch. Currently we have three different WhatsApp groups which allow students to exchange messages in near real time even if they have only intermittent Internet access. It’s also done a lot to foster continuity and foster team spirit!

Several of our students in Africa went the extra mile and made great contributions to Full Stack Embedded by helping their fellow students, posting updates on their projects for inspiration, by helping organise the workshops or even by contributing tutorials of their own. It’s been extremely fulfilling to learn from them and to see them grow as they conquer challenges large and small. This has also expanded our group of potential teachers in Africa, raising the possibility of extending our operations to new groups in new areas. 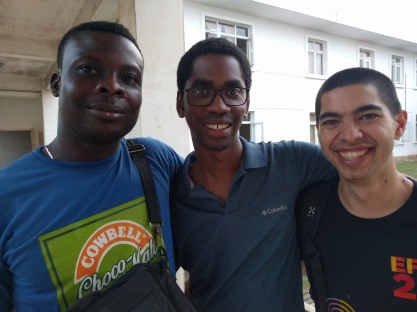 Kudjo, an instrumental supporter and friend from Lomé

Some of our key crew from Togo. 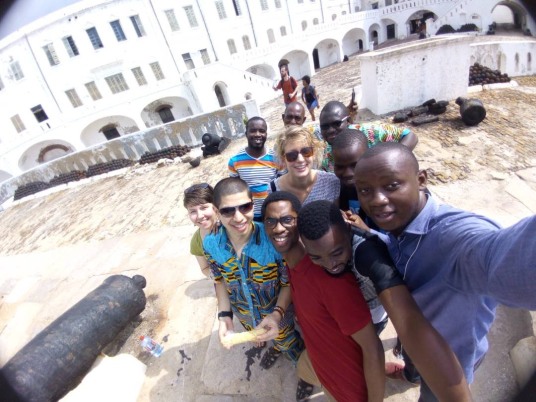 AIT’s Robotics Club is too cool for school!

We also took the chance when we were in Africa to meet with some innovative and inspiring people working to improve living conditions and educate young people in Ghana and Togo.

One exciting visit took us to Kpalimé, to initic’s Raspberry Pi lab at Collège Polyvalent Saint-Esprit. Students at that school use Raspberry Pis as desktop computers. They were excited to see that the same device can power a robotic car too!

Our European team has expanded to include a few more contributing authors and fundraisers, as well as a new board member. Carmen has contributed immensely to our successes this year already and we’re extremely glad to have her on board going forward!

Lastly, but also importantly, we are now a recognised non-profit organisation, which means that we’re finally able to accept donations. Up till now we’ve financed everything ourselves, and while we’re willing to continue making significant contributions as we have up till now, the project is growing rapidly and we need ways to finance extended operations. Many people have asked how to donate in the past – now it’s finally possible, and we even have a crowdfunding campaign active if you want to contribute now.

2017 was a great year, and for 2018 we have even bigger things planned! More information on that will follow soon, but in the meantime… Keep innovating! We’ll see you in 2018!

Did you say two workshops? Yes we did! After finishing up an awesome workshop in Accra with the students from AIT, we crossed back over the border and did it again at Lome Business School.

END_OF_DOCUMENT_TOKEN_TO_BE_REPLACED

What a week! We spent the last few days in Accra with the students of the Accra Institute of Technology (AIT). The AIT Robotics Club invited us to come and teach a workshop on robotics and a seminar on software verification, so we have spent two and a half full days with the students there – some of the funnest days we’ve had all year. We’re exhausted, but not as much as our hard-working students who worked nonstop in order to complete their projects.

END_OF_DOCUMENT_TOKEN_TO_BE_REPLACED

Find other ways to get involved here.